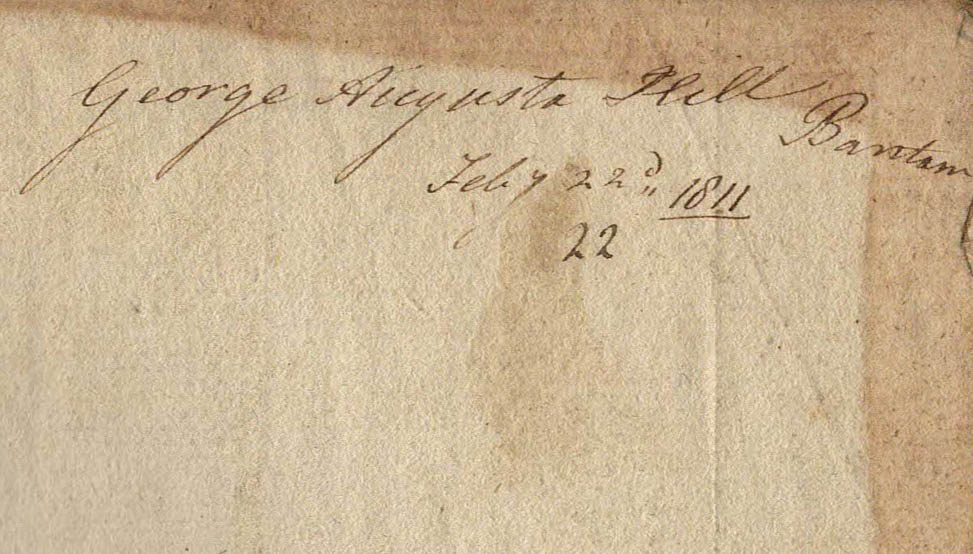 A few survive of what could have been a large collection of books in the Hill family nursery – judging by the mother, Mary Marchioness of Downshire’s fondness for reading. The illustration is from the flyleaf of a well-thumbed, leather-bound octavo copy of Aesop’s Fables – or rather “Select Fables of Esop and Other Fabulists” to give it its full title, “Printed by John Baskervlle [sic] for R. and J. Dodsley in Pall-mall 1764”. The title page bears the signature of the younger of the two girls in the family, “Mary Hill 1808”, but by three years later her youngest-of-five brothers had taken possession: George Augusta repeats his signature on the following page for good measure, though without the soubriquet: “Bantam” seems perfect for a nine-year-old Georgey.

“The Pleasures of Hope” with other poems by Thomas Campbell is inscribed “Charlotte Hill – Given me by [brother] Marcus Hill, Decr 5th 1810”.

Of the seven children, their sickly fourth brother Augustus became something of a book collector in later life: already aged six his firm signature is found in “Original Poems for Infant Minds”, and a concise version of Johnson’s Dictionary has the words “Arthur Augustus Edwin Hill, a Gift of my dear Sister Charlotte for good behaviour”.

By contrast, the eldest of the family wrote home from Eton about his 12-year-old brother Arthur Moyses William (later to become ADC to Wellington at Waterloo): “Pray don't send any novels for Arthur's library because they are of no use.”