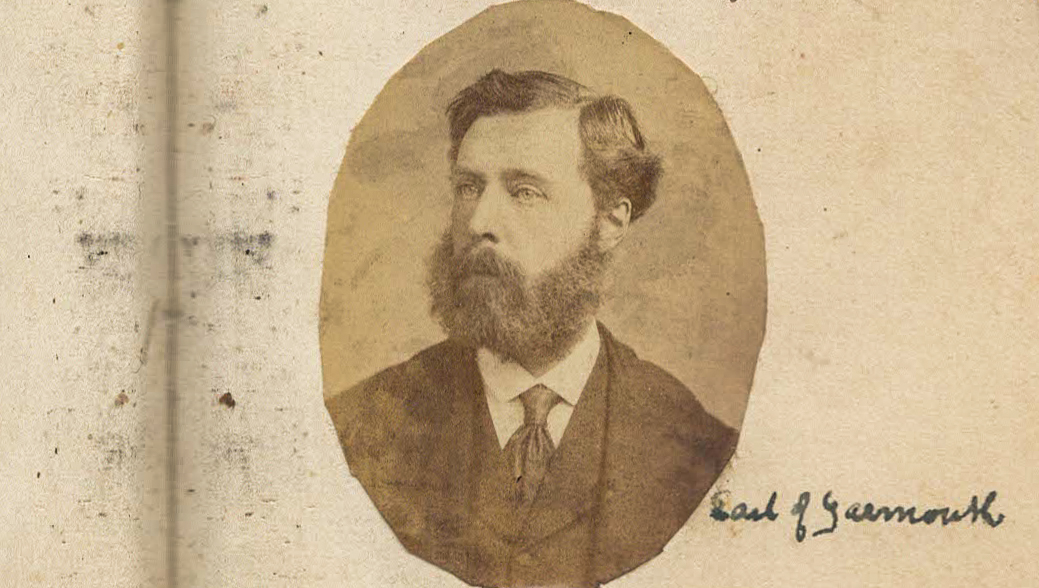 Despite the fact that the Sandys’ ancestral home of Ombersley Court, Worcestershire is only 18 miles distant from Ragley Hall, Warwickshire, the seat of the Marquess of Hertford, there seems to have been little major consonance over the years between the two families (one traditionally Whig, the other Tory). Nevertheless, the Ombersley archives do contain one or two references.

In August 1810, Mary Marchioness of Downshire and Baroness Sandys (MDS) receives a letter from her eldest son, describing the 2nd Marquess of Hertford dining with him at Hillsborough Castle. The old buck…  arrived very punctually… He sucked in pretty well some red Champagne, & seemed very much pleased. On the return visit a week later, we arrived at ¼ past 6, whereas his Lordship's dinner was punctually ready & roasted at five!

MDS’ daughters, writing in their journal, report their mother speaking to Lord St Helens some years later of that rich Jew Lord Hertford wanting to extort 100 Gs from her for a bad picture, supposed to be of her Aunt. Although the same girls, after a journey from Ombersley to Warwick, write that, The Road we travelled is perfectly lovely: Ragley looked beautiful, they give consistently low marks both to Lady Hertford and to her son, later the 3rd Marquess, who looks like a butcher. Nevertheless their elder brother Lord Arthur Hill dines with him, and their younger brother, Lord Marcus accompanies the 3rd Marquess to St Petersburg, to convey the Order of the Garter to Emperor Alexander – see pp 102/3 of fragments no. 5.

Franco Seymour, later the 5th Marquess of Hertford, then only aged 13, was also a member of this embassy: passing on Franco’s reminiscence of the Garter Ceremony, his wife later writes that the handsome Emperor suffers from a defect: His nether man was very inferior – his knees were large and calves small… He was obstinate and declared nothing should make him wear knee-breeches, or tights, and at one time it looked as though Lord Hertford would have to bring the Garter back to England. At length, however, the Czar consented to don the obnoxious garments, but insisted on the ceremony being strictly private… The Empress and her Ladies, placed behind a curtain, peeped out and witnessed the ridiculous function, which was an insult to England and her Sovereign.

(This quotation comes from a memoir, By faith and love – published last year by Somerton books – by Hugh, the late 8th Marquess of Hertford.)

The nearest the Ombersley and Ragley families come to a close marriage alliance is during Lord Arthur Hill’s long courtship of Minnie Seymour, which deserves an essay of its own. Minnie’s nephew is that same Franco, 5th Marquess of Hertford, though some persist in thinking Minnie herself to have been the daughter of George IV (when Prince of Wales) and Maria Fitzherbert.

On 21st November 1938, Lord Henry Seymour, heir presumptive to the 7th Marquess of Hertford writes from Ragley to Mikey, 5th Baron Sandys, accepting an invitation to lunch at Ombersley: I am not such a d-d crock, & can walk a mile or two – and can put down a glass of port, when available. Seven months later, however, Mikey finds himself part of a large congregation at the Guards’ Chapel for Lord Henry’s funeral, which means that on the 7th Marquess’s death the title passes to the above-mentioned Hugh, still only a young boy. Hugh also inherits Ragley’s groom and chauffeur, Richard Loomes, whose family is from Leicestershire originally – as is Mary Loomes, nurse to Mikey when himself a young boy.

The photograph accompanying this post is from an Ombersley album: it must postdate 25th August 1870, the earliest that the future 6th Marquess of Hertford would have been known as Earl of Yarmouth. Another photograph of Lady Yarmouth sits alongside – she was Mary Hood, 2nd cousin of the 6th Baron Sandys.